skip to main | skip to sidebar

It seems like I always come back to very abstract work.  The genetic paintings became very painful toward the end.  My system was giving me terrible images to work with and making me paint them again and again.  I felt the need for a little freedom so I painted a self portrait to break free from the system.  Then I started some more paintings that went back to networking lines together.  I find that I love clean and crisp things that are layered in with more painterly elements.  I really like some of the results.  Here is a link to check them out.

Posted by Randal Marsh at 12:31 PM No comments:

My genetic paintings were somewhat successful.  Some of them aren't ugly, others I've already painted over.  You can check out some of the paintings and the system I used for finding images here.
Posted by Randal Marsh at 12:25 PM No comments: 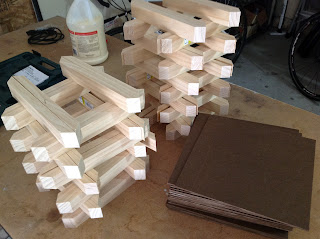 Recently I have been doing some reading about complex systems. This has motivated me to make artworks that illustrate or are based on complex systems or complexity science. After looking at artists with similar interests I discovered that the basic ideas I wanted to communicate have been addressed in depth by other artists, i.e. Philip Galanter. I’ve been looking at generative and rule-based art that is built from ideas such as cellular automata and genetics. My challenge is to represent some of these ideas in original ways. Specifically I’ve been brainstorming genetic artworks where subsequent pieces are built from the “genes” of parents, using the same visual material. Most of the artworks I’ve viewed that respond to complex systems and generative art are fairly cold and formal. Many of them are created using computers. Although I have no problem with digital art and will probably incorporate some digitally created imagery, I’d like these pieces to show more of my hand in the work. I’d also like to avoid artworks that completely lack representational elements.

I’ m hoping my work will be appropriate for a show I’m participating in this Fall. The show, curated by Namon Bills, is called E Pluribus Unum and is a political show responding to the extreme partisan nature of our government. Namon contacted me about this show after I had begun working on ideas for genetic paintings. E Pluribus Unum which means “from many, one” is a great unifying theme for my genetic paintings which will evolve an artwork over the course of generations.

I plan to execute 26 11”x118” works on panel. I will use acrylic, ink, toner transfer, and colored pencil on gessoed panel. Each week I will make four new pieces. At the end of the week I’ll select which two pieces are the most aesthetically “fit” from that generation. Those two pieces will become the parents of the next generation. Each generation will be a combination of the visual elements present in the parents picked from the preceding generation. The final series will be displayed all together and organized by generation.

Posted by Randal Marsh at 4:55 PM No comments:

Whiteboards and the Darwinian Theory of Beauty

This is a TED Talk by Denis Dutton where he discusses what he calls a Darwinian theory of beauty.  The ideas he brings up about beauty are interesting and even compelling although they certainly don't tell a complete story.


Posted by Randal Marsh at 8:07 PM No comments:

I'm currently working on a masters degree in art education and I've been thoroughly enjoying my classes.  Here is a fascinating RSA animation on changing education paradigms.  This idea goes hand in hand with many concepts I've been studying.  If you've never seen one of these animations then you should definitely check it out.  The style of visual communication in this video is just as compelling as the ideas presented.


Posted by Randal Marsh at 8:57 PM No comments:

Art in its most meaningful sense is a classification in the mind that allows the viewer to perceive a disclosure of something in a work. This revelation is truth. Successful art is determined by the presence, importance, quality, or quantity of the truth.
Posted by Randal Marsh at 3:10 PM No comments:

In this series I attempt to express my views on art as they have been influenced by the philosophers I have studied. Although many of the ideas are directly connected to the ideas of these philosophers, it is often the case that my use of their concept is not quite in harmony with what they were originally claiming.


A man’s relative view of beauty is closely related to his taste in any art form. In a world where most art forms are reproduced to allow for mass participation, a man’s view of an art form is always affected by the reception the art form has received by those he knows. Unfortunately, it seems that Adorno is right in his observations about how elements of the art are fetishized and become commodities. Although Adorno addresses music specifically, I can see the same patterns in visual art. A man’s circle of friends could become interested in color-field painting. The man would then be more likely to enjoy color-field paintings and may find himself wanting one in the same way he wants a pair of bell-bottomed jeans that are in style. The style of color-field painting would be the commodity. A well known artist's name could similarly become a commodity. When art is functioning as a commodity it could still reveal truth, but the judgment of the work loses some of its sincerity. I think the art world is largely affected by the commodification of certain elements of artworks. This clouding of taste does not have a positive influence on artists who seek to make successful works of art that communicate truth. I believe that the art world often has a negative effect on artists who leave their sincere search for discovery in favor of popular styles that appeal to critics or art professors.


Walter Benjamin talked about the ritual or cult value of artworks that has existed in the past. In the age of technical reproduction this cult value is being replaced by the commodity value of works. I view both the commodity value and the cult value of an artwork as a means of displacing an artwork from everyday life and allowing it to be considered as an artwork in the Heideggerian sense. For example, if there is only one statue and it can only be seen in a certain place then the man who puts forth the effort to confront the statue on its terms will enter the space predisposed to consider the statue in the artistic sense. Thus the ritual value of the work affects the man’s perception of it. The cult or ritual element of the work can be created by its inclusion in a gallery or museum setting, or by it's framing and presentation.


I also think Adorno was speaking accurately when he said that a consumer who pays a premium price for a performance to a show pretty much guarantees the success of the performance in his mind as he reflects the exchange-value onto his taste. Similarly, a man who pays $2,000 for a limited edition print will have elevated the value of the thing in his mind. He will then consider the print to be more than just a copy of something or a piece of decorative equipment. Instead he will likely consider the print in the artistic sense (as Heidegger has described). I do not intend here to confuse the value a man places on an artwork with the artistic (aesthetic?) experience, but rather to claim that when a man holds a work in high esteem he may be more likely to think on it deeply. I suppose there is another possibility that the man will never truly consider the work because he has already pre-judged it. I expect both cases occur frequently.


The commodification of art conflicts with our idea that fine art is a thing that is made for its own sake (the communication of truth) rather than for its utilitarian or commercial value. Art that is produced to sell and panders to the tastes of a certain clientele is less likely to include meaningful pieces of truth and more likely to include trendy elements. It seems this happens among the most high brow circles in a similar way that it does with Thomas Kincade paintings. This is where the distinction between fine art and other arts is gray for me. Illustrations could definitely be perceived as art in the Heideggerian sense on occasion and it would be foolish to think that famous contemporary artists never consider the potential response of their audience.


One last thought on this topic pertains to the way in which we learn to appreciate new art forms. New styles, media, methods, and concepts often carry the ability to communicate truth. Sometimes a viewer isn’t willing to consider the new form until it has been endorsed by someone they know or whose opinion they trust. So although it may be a disadvantage to let others' opinions mold one's own taste, it is likely an advantage to listen with open ears to their opinions and critiques. It is then the responsibility of the viewer to accept or reject their ideas. The conversation about art can go a long way toward helping us discover truth where it is in the work. After we learn to see a certain way we may find we can do so without help. A well-taught literature class or book group would be an example of this.
Posted by Randal Marsh at 3:06 PM No comments:

Randal Marsh
I teach art at Mt. Ridge Junior High in Highland, Utah and make art in my Pleasant Grove studio. My favorite thing in the world is spending time with my wife Katy and our daughters Ryann and Lucy.